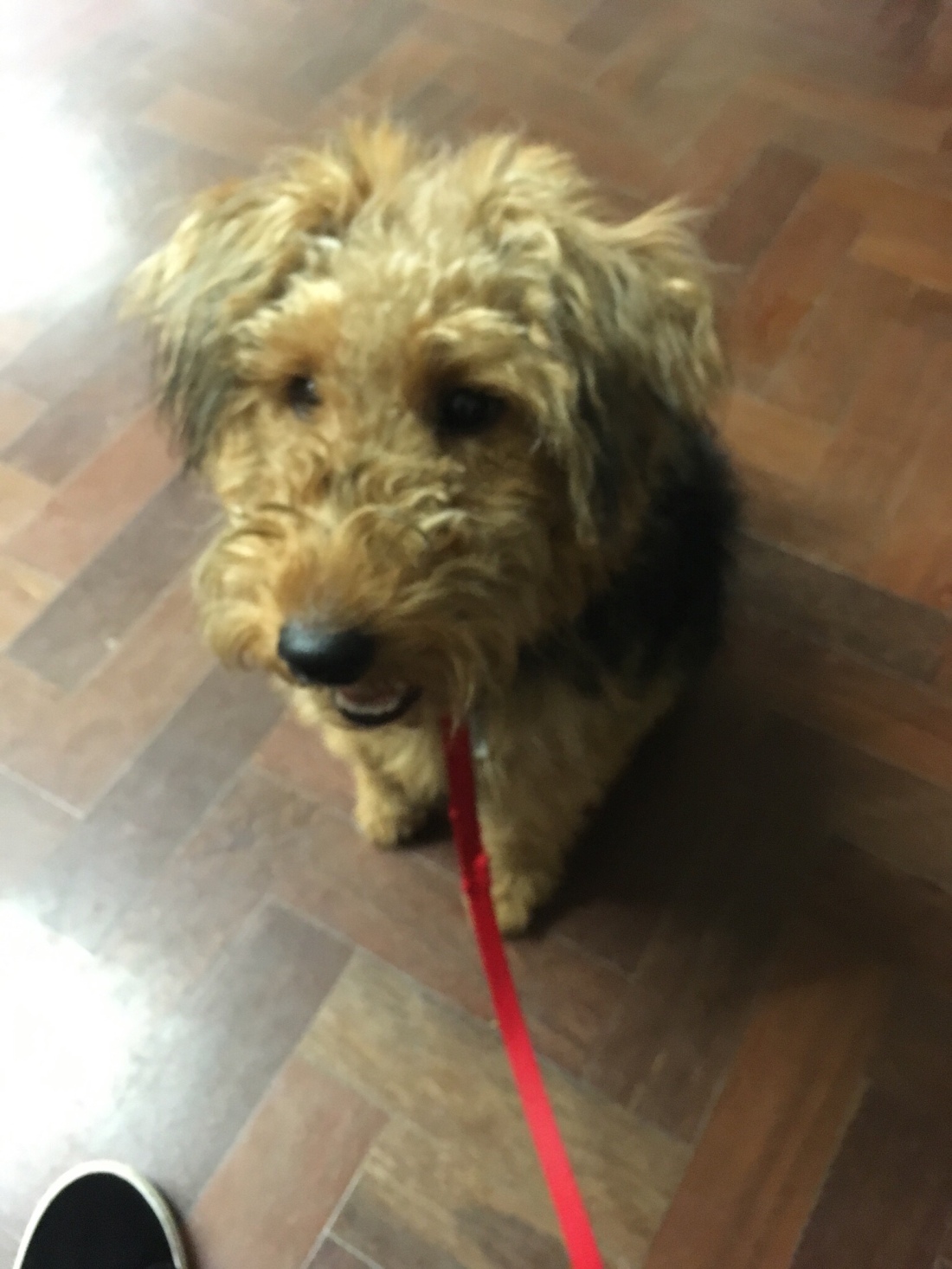 Maybe Dylan knew it was our last puppy class for a while because, like a veteran performer doing a farewell gig, Dylan decided to replay all her greatest hits tonight!

As usual Dylan did a meet and greet round the room and we settled down with the cavapoos Molly and Boo. Well, not exactly settled, as Dyls was bouncing around like Tigger on a sugar high!

It was going to be one of those nights.

So we begin, sit stay not a problem.

Down stay is never going to happen, I think even the trainer has given up on that one, as while all the other puppies lie quietly on the floor, Dylan was bouncing up and down trying to grab my sleeve – oh how I though the days of ripped sleeves and trouser legs were over!

Off lead recall, and deliberately I had brought the cat treats – after all they worked wonders last week.

Mind you, the Pointers mum gave me a disapproving glare and told me I shouldn’t give them to Dyls, even though they are all natural chicken treats.

Slapped wrists for me! Perfect off lead recall for Dylan.

Well not quite true, as quick as a flash after she came to a halt and sat in front of me for her treat, she was off again, over to our seat, grabbing the packet of cat treats in her mouth, and with a show of defiance shook them in the Pointers face.

Bit of a ner ner na ner na moment! Or don’t mess with me and my mum!

Walking backwards with our puppies in front, and yep Dylan did the mop. In fact I think she had planned it with the girls as Molly and Boo did the mop too, their little legs splayed out, chubby tummies polishing the floor. In a line and in perfect sync. All that was missing was a soundtrack.

Even the trainer laughed.Though she wouldn’t be laughing for long.

Onto off lead walk round the room, three quarters done and it was going so well, if at a tortoise like pace. The trainer tried to move Dyls along.

Dylan stopped dead, looked up at her, looked at me…tilted her head… the other trainers at the desk went “aww she’s so cute.”

I know now that look means trouble. Before I could say no, though what was I thinking because when does Dylan ever listen to me, Dyls squatted and did the biggest wee in the world.

Which splashed over the trainers feet – and yes she was wearing sandals!

Mortified and full of apologies, I think it says a lot for the woman that she merely said “And that was a protest wee wasn’t it Dylan?”

Dyls looked up at her, did the cute butter wouldn’t melt head tilt.

But something else had grabbed Dylan’s attention, the other trainer had got out a real mop and so Dyls was off, growling and hanging off the stringy ends as the poor woman tried to clear up.

The mop went back in the kitchen, Dylan was put back on her lead and class began again.

A second off lead recall, and the lure of cat treats does not not come anywhere near the lure of a mop. Dylan was on a mission.

Flew past me, into the kitchen and emerged triumphantly with the mop.

It took four of us to catch her and wrestle it from her grip. She’s growing up to be a strong little Welshie.

I think if I’d taken a hip flask with me, every one would have had a tot – or two, or three!

Finally it was the gate. Dylan did it perfectly. Walked up to it, sat waited patiently while I opened it – except I grabbed the wrong side and the gate came off in my hands.

The little monster looked at me as she sat there and then looked away, as if to say, “Oh you’re so embarrassing!”

We then lined up and walked single file to the door, the puppies had to sit and then we exited the hall.

I spoke to the trainer and told her we would be away for some weeks.

She seemed quite upset . Funny I thought she’d be relieved.

“That’s a shame, because believe it or not Dylan is progressing and I was about to move her up to the next class and start her on her Bronze Good Citizen. She’s a Welshie, therefore she’s intelligent and needs more of a challenge. And I love her because she is also a challenge.”

I must admit to getting a bit choked up. Dylan jumped up at the trainer and got lots of hugs and kisses.

“Call me when you are back, class won’t be the same without her, it will be a dull summer”

With that we hugged too, Dylan said goodbye to Molly and Boo. It was emotional.

So tonight It was red wine in readiness for things to come – while Dylan ate her chicken and rice. And maybe as it was our final class for a while, I couldn’t help but have that Frank Sinatra song going round in my brain. Yes Dylan certainly did puppy class her way!

In a couple of days we are off to France for the summer. We will try and find a class out there – but even if we do, I am sure every Monday night our thoughts and hearts will be in that little hall and the puppy class back home.

4 thoughts on “Going out with a bang!”