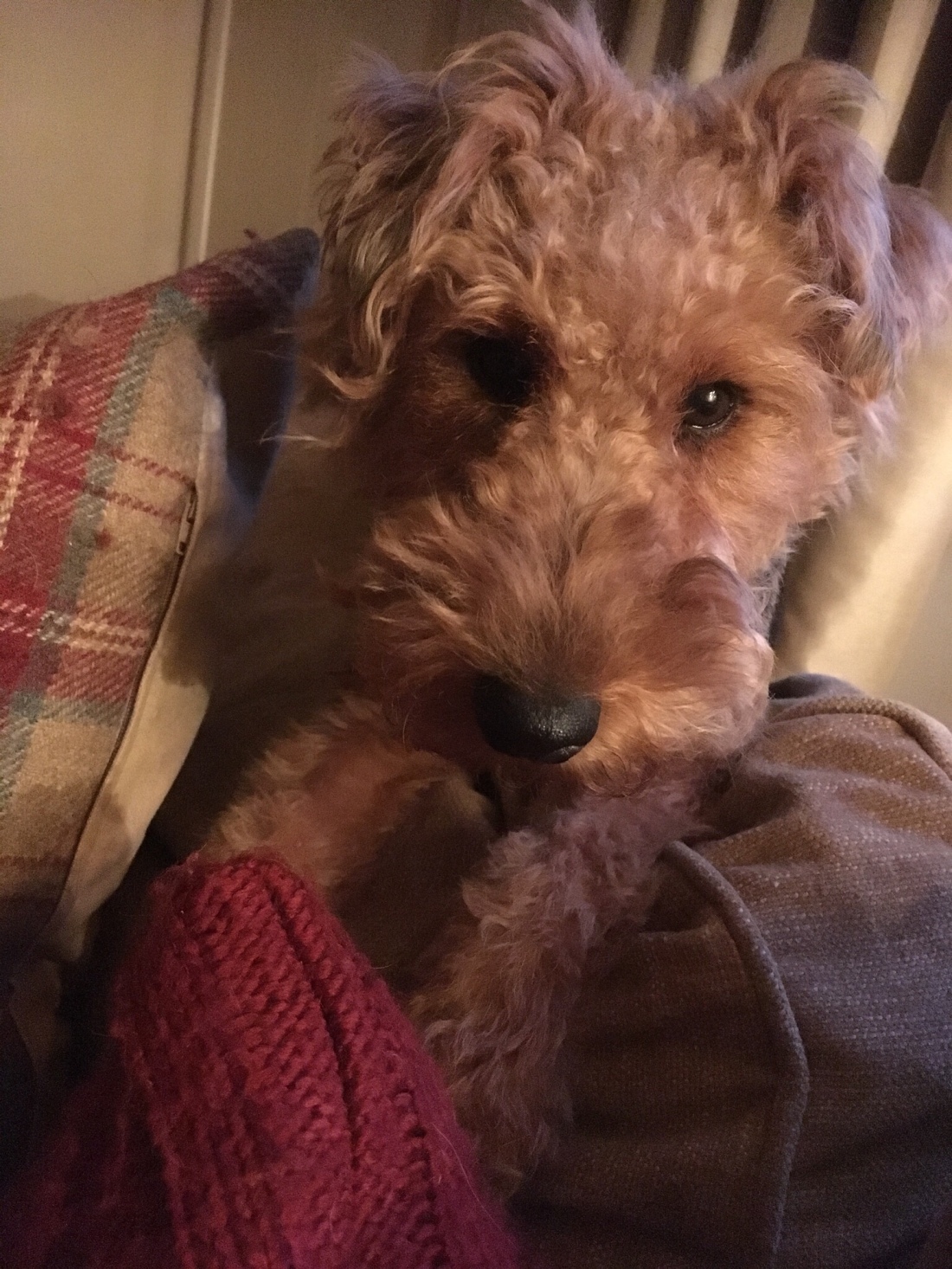 I think aliens have abducted Dylan and replaced her with a puppy that looks exactly like her, but is willing, obedient and follows all commands – well almost all.

That can be the only explanation for tonight’s puppy class. Because Dylan nailed it!

And I think it’s because I made a mistake on the treat front.

We were running late and rushed into class. It does say something for Dylan’s status as most popular puppy in class, as everyone stopped ( including the trainer) and said “Yay, Dylan’s here”. Although as I’ve said before, part of me thinks it’s because Dylan’s misbehaviour makes everyone else look good.

While the terrible trio Dyls, Boo and Mollie, the Cavapoos, rolled around on the floor, Boo’s mum told me yet another puppy, a black lab called Ruby, had been moved up to the next level, and this was the last week the German shepherd was in class before also moving up.

Meanwhile, Dylan had spied a newcomer, a handsome standard Schnauzer called Brian, and trotted over to say hello – or more likely to sniff out and recruit a new member of the bad puppies club.

Brian backed up and went under a chair. Dylan looked confused. She’s not used to being ignored. Brian’s mum explained he was very nervy and other dogs had snapped at him so best to be cautious.

But of course, that’s not a word that appears in a Welshie vocabulary. And we know Dyls likes a challenge, failure is not an option – if it’s something she wants to do.

So class begins. The usual sit, stay, stand and down. Dylan did it all brilliantly. But rather eerily kept looking up at me as she did it. I say eerily because usually Dylan refuses to acknowledge that she even knows me.

Which always is a boost to my ego – not!

Treat time for a job well done, and I pulled her bag out and realised in our rush to get out, I had picked up the wrong ones and had cat treats.

And this turned out to be a hallelujah moment. Dyls could not get enough of them.

Onto recall, and yep Dyls bounded towards me and the cat treats, and slid into a perfect sit.

Off lead walk round the hall and this is where disaster – or the broom cupboard – usually strikes.

But no, apart from a quick stop off to jump on the trainers black Cockerpoo, Basil, who was laying quietly in a corner, Dylan trotted beside me doe eyed and salivating at the cat treats.

The gate and there came the only hiccup of the evening, when Dyls was distracted by someone coming into the hall and, being a nosy little bugger, was more interested in what was going on there rather than sitting and waiting to go through the gate

The trainer was impressed. “I can see you two have been putting in a lot of practice”. Didn’t have the heart to tell her it was because I cocked up on the treat front.

Meanwhile, whenever we lined up for exercises Brian the Schnauzer was being moved away from a couple of dogs that were stressing him out.

It was time for Dylan to go back to her mission – Get Brian.

She approached, her little kinked tail wagging, then cleverly went into submission pose. Brian moved forward, had a little sniff. His tail started to wag.

Dylan backed up and Brian came to her. In the next line up the trainer put Brian next to Dyls as “they seem friendly”.

For the rest of class Dyls and Brian were inseparable. Mission accomplished.

And I don’t know what the allure is my little puppy has got, but if I could bottle it I’d be a billionaire!

“I bet you get moved up after that” said Boo’s mum, who admits she is obsessed about the next class, and still hasn’t got over the fact that Dotty the Spaniel, who is as scatty as ever, progressed to the next class a while ago.

I suspect we won’t, as they say one swallow doesn’t make a summer. 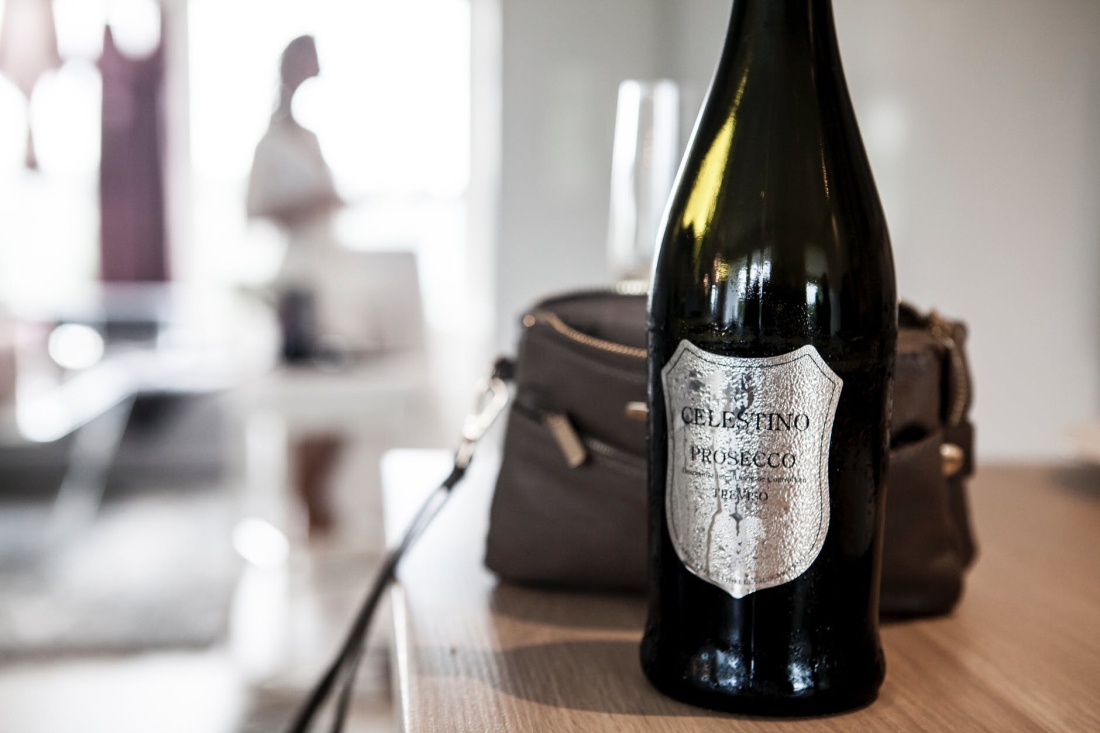 So tonight it was bubbly Prosecco and it tasted bittersweet, as Dylan did triumph in more ways than one – most importantly getting a nervy puppy to join in, trust her and play with her. Proud of my little one for that. However, next week is our last week at class as we are packing up and heading off to warmer climes for a while – which at least will give my liver a rest!

But, I’ve checked and Dylan can go to puppy class until she is 18 months old, so we are good to go when we get back. And maybe, or should I say peut etre, we will find a puppy class where we are heading… now that would be an adventure!