It was all going so well. Dylan has been having a brilliant summer in France. Her naughtiness has reached new levels – see previous post Dylan what have you got in your mouth now? – and she’s learnt how to chase chickens and pull their tails. Thanks for that Wiglet.

But on Thursday evening disaster struck.

As we were watching the tennis, Dylan came racing in, launched herself on the sofa and began frantically rubbing her ear against the cushions.

She leapt off the sofa and sped round the room, obviously in distress.

We managed to catch her and tried to look in her ear – not an easy task – we three now bear the scars of sharp little puppy claws.

Dyls was going mad. Shaking her head, rubbing her ears.

This is rural France so immediately we thought she had been stung or some heeby jeeby had crawled in her ear.

She was distressed, she was panting. So was I truth to be told.

Horrible seeing your baby in agony.

Eventually we managed to clean her ears with wipes, put in some ear drops and massage them in.

Again being rural France there are no 24 hour vets nearby.

The next morning You could tell Dyls wasn’t her usual self.

Phones, pens, shoes and mops all remained untouched – things were not right in this Welshie world.

And she was still shaking her head, rubbing her ear, which was down and holding her head to one side.

We called the vet and took her in.

Now last time we were there was to get Dylan a worming tablet before coming back to the UK.

And we cunningly pushed it into soft cheese.

So Dylan skipped into the vets, as clearly she now associates it with treats!

I followed, watching her wobbly Welshie bottom bouncing along, full of worry about what was to come.

The lovely vet checked Dylan’s good ear – she didn’t like it but stood like a good girl.

Then the “bad” ear. Dylan went mad. We couldn’t hold her and she’s a strong girl.

She wasn’t having any of it.

The vet apologised and muzzled Dyls, who was getting more stressed by the minute – as was I.

The vet in French and a smattering of English explained Dylan would have to be sedated so she could be examined.

It had to be done, though leaving her and closing the door on her, hearing her cry as we did was one of the hardest things I’ve ever done.

But it was the right thing to do.

She seemed so tiny and so vulnerable. Such a little puppy to anaesthetise.

We had to collect her in three hours – and as anyone who has been through this knows – it was the longest three hours ever!

Harley and Wiglet rushed to the gate and looked confused as there was no Dylan.

Wiglet undeterred searched the house for her surrogate baby.

Harley sulked under the table.

We were all subdued. All worried, but none of us dared speak about it.

Instead, in true British tradition, copious amounts of tea were drunk as we watched the hands of the clock move agonisingly slowly until we could pick her up.

The mantra ‘no news is good news’ kept going through my head.

Finally it was time, and we broke the French speed limit getting back to the surgery.

The vet appeared. In her hand was a long spikey grass seed that had got embedded deep in Dylan’s ear.

The vet said it would have been really painful, but the good news there was no infection.

She got Dylan, who slowly walked over to us, a bit wobbly and a few sideways steps.

And then the bill. Of course money is no object when it comes to our little ones, but the bill for consultation, anaesthetic and the procedure was €46 or about £40.

In the UK the consultation would have cost this alone.

A bit like when Harley had his herniated disc operated on – in France it cost €1200 or around £1,000 for several scans, tests, operation, medication, aftercare.

In the UK it would have cost around £7k.

Which makes me wonder why vets back home are so bloody expensive.

By the time we carried Dylan to the car, she was snoring again.

The vet told us to keep her calm and quiet that evening.

Mmm, she obviously has never had a Welshie puppy.

Within two hours after lots of love and cuddles, Dyls was back to doing what she does best – chasing the cats, jumping on Wiglet – albeit at a slightly slower pace.

And had chewed off the little bright blue bandage that covered the spot where she’d been shaved and injected.

And today – well so far she’s stolen the chickens feed bowl, a mobile phone, done zoomies round the garden, leapt onto the garden table and barked at the neighbours. And wanted us to chase her. 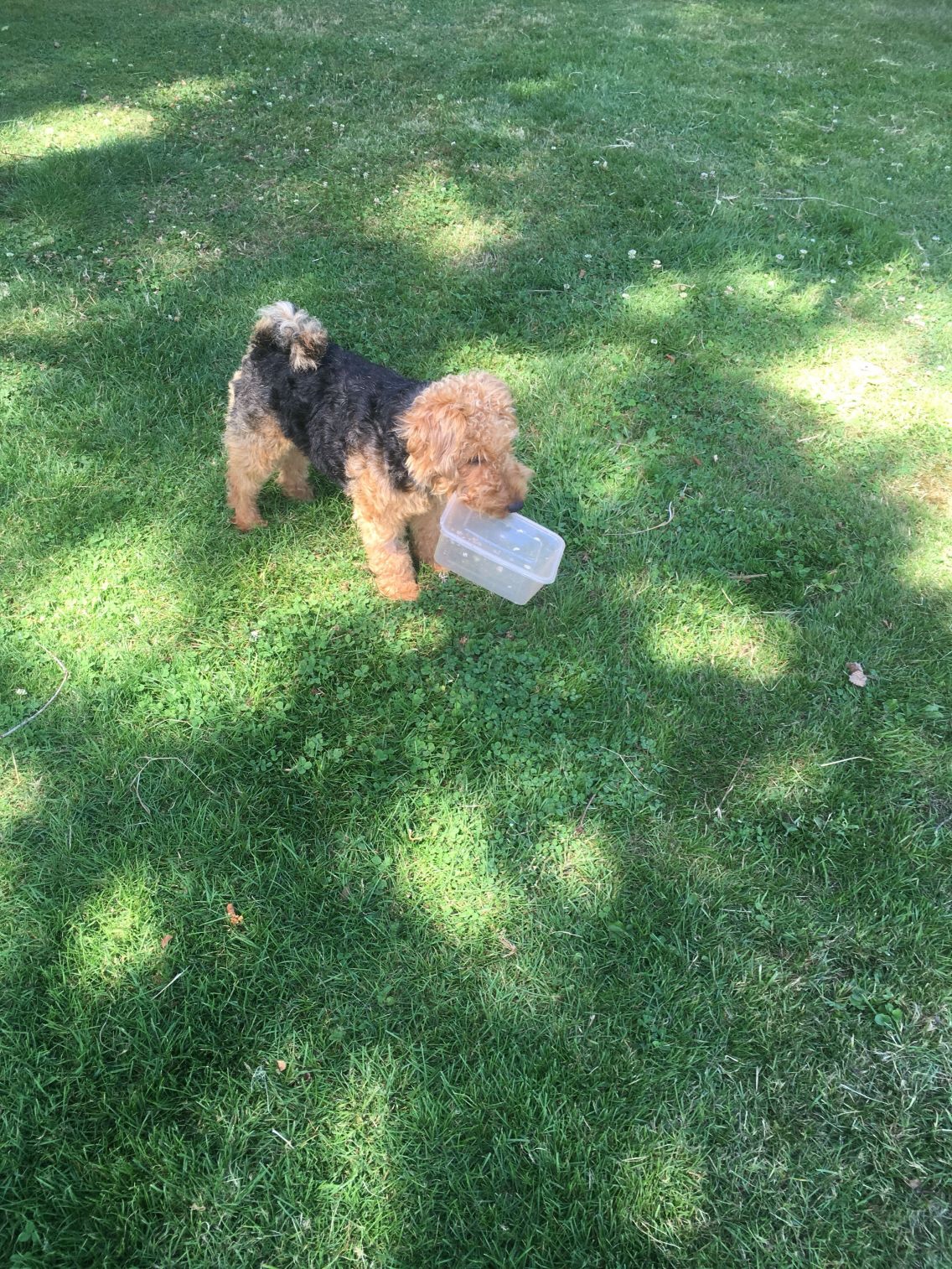 Yes Dylan is back with a vengeance.

You can’t keep a Welshie down!

And I have never been so happy!

Yes it was minor, but it was a sharp reminder that when our babies are in pain or distress, so are we.

All we can do, is to do our best for them – and hope all will be Ok.

And thankfully today it was.

2 thoughts on “Keep her quiet they said…Yeah right!”