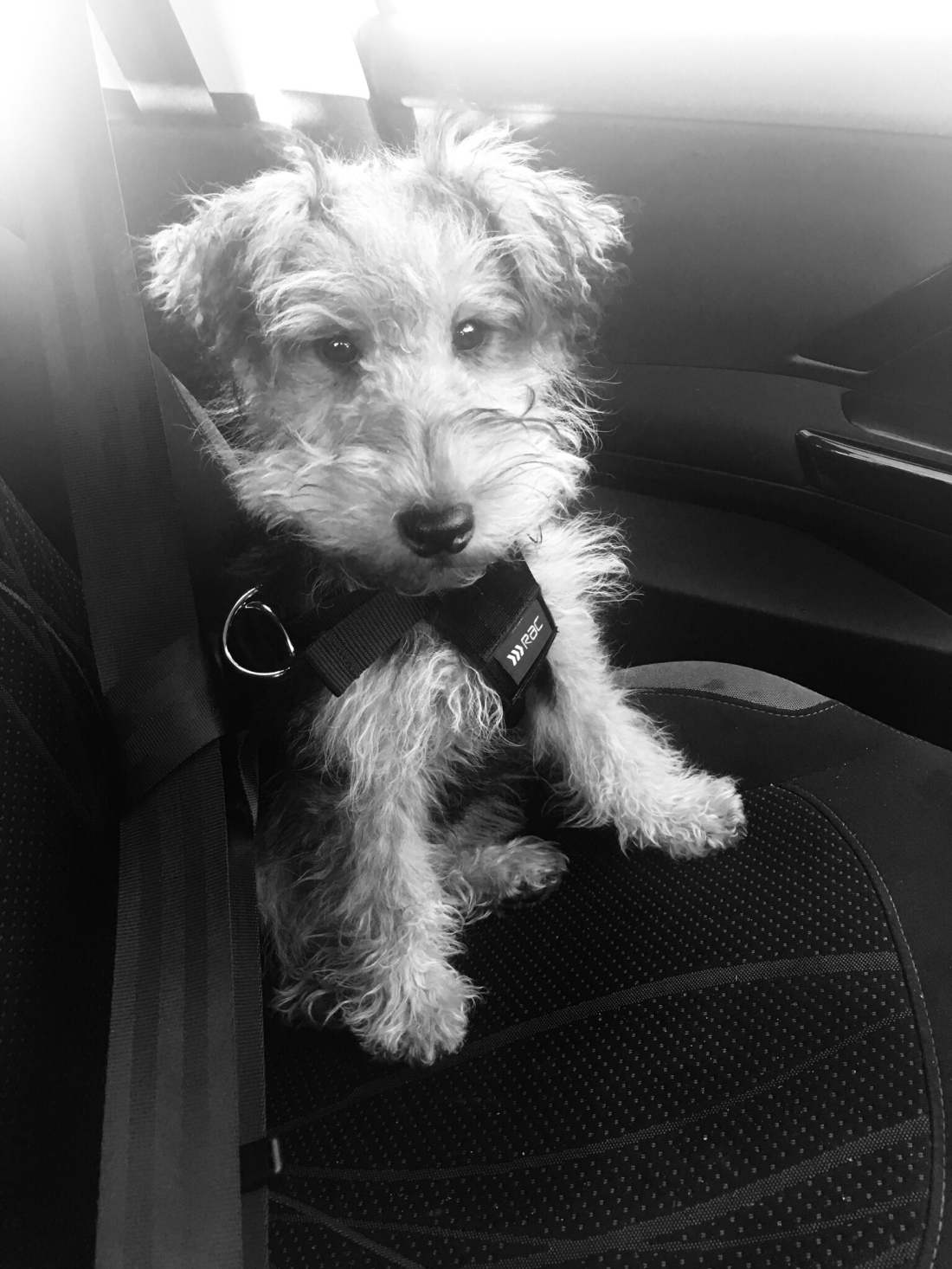 At the end of last summer I was in Spain with my friend Sue. The poor woman couldn’t enjoy her evening Sangria round the pool without me whipping out my phone and showing her yet again the videos and photos of this little chubby puppy I was picking up the day after we got back.

Oh I made her look at it so many times. Then I made her go through puppy names with me. Let’s just say Dylan could have been – Nia, Charlie, Winnie, Lucy or my favourite at the time  – Chubster! Goes without saying none of those names suited the little mischievous tomboy monster Dyls turned out to be. Then I made Sue look at the photos again and again and repeat! No wonder she raced to get on that plane back to the U.K.!

And of course, as I was so excited about my new puppy, I started a stealth campaign to persuade Sue to get a puppy. Actually, thinking about it, it wasn’t stealth at all, but quite blatant – “You should get a puppy.”

Unbeknown to me, at the same time, Sue’s sister had also started a ‘Get a puppy ‘ campaign.

Then just before Christmas a photo appeared in What’s app. It was Sue cuddling a teeny tiny black puppy. “Meet Maisie” was all the message said.

Yay! She’d done it! And Maisie the gorgeous jet back Maltipoo went to live with her.

Now my friend has a lovely house. Fresh cut flowers, White Company candles, nothing is ever out of place. It’s an oasis of calm and tranquillity. And because of the job she does, Sue like to be super organised and in control.

Yep good luck with that and a puppy!

So Sue had visions of little Maisie with pink bows in her hair, pretty matching pristine accessories –  the perfect Princess puppy.

However, the thing missing in that equation was the clue in the name of Maisie’s breed. Maltese TERRIER!

Maisie arrived and she is a bundle of energy, quick as lightning, never slows down – and its been a fair few months now – and is into everything.

Sue soon waved the white flag and accepted she had a terrierist for a puppy.

Maisie has left paw prints all over Sue’s house, and  as happens to us all when you let a dog in, a house becomes a home. And little Maisie has left giant pawprints on Sue’s  heart.

Like me, Sue has had loss and is embarking on a new adventure but with Maisie by her side.

And as Dyls does with me, Maisie makes Sue laugh every day.

She is more relaxed, chilled, out of control in a good way, she’s doing all the icky stuff you have to do when you have dogs and admits she’s doing things a while ago she could have never imagined. In short,  Maisie is the best thing that’s happened to her.

And the other great thing, Dylan and Maisie are best friends.

Well that is apart from a slight hiccup the other week, when Dyls was in her season and dumped poor little Maisie the minute Reg the black Labrador arrived.

It was as if Dyls had decided Maisie was the irritating little sister who has tagged along on a steamy first date. Dyl threw herself at Reg –  definitely being a tramp not a lady  – start humming ‘Lets Get it On’ by Marvin Gaye and that pretty much sums up how Dylan was behaving.

At least Reg is only 6, which compared to 11 year old Oscar Dylan last threw herself at, at least she is going for younger men now!

But thankfully Dylan’s season is over – yay! And we were invited round for a BBQ.

Maisie didn’t bear a grudge and soon the girls were racing in and out of the garden, up the stairs, through the sitting room, joined at the hip. Poor Reg couldn’t work out how a couple of weeks ago he was an Adonis and yet this week he was being ignored!

The dogs had a great time, we had a great barbecue and were feeling relaxed and mellow and enjoying delicious plump strawberries and cream.

I have realised I now recognise the warning signs with Dylan. First she comes and wants a cuddle, then looks at me as if to say ‘Sorry, but you know what I’m like’.

Its as if she thinks the cuddle is good enough insurance for what’s about to hit.

So Dyls quick as a flash jumped up at a bowl of strawberries, but to her dismay the bowl was empty. Undeterred she grabbed the spoon, raced off into the garden, me chasing her and apologising profusely, through the house, up the stairs, and into the bathroom where I finally cornered her in the shower and rescued the spoon!

Dylan stomped around, eyes darting left to right just looking for the next bit of mischief until Rebecca made Dyls sit by her for a cuddle.

Bang! Dylan was up and running, this time with Rebecca’s   keys in her mouth, which she had stolen from Rebecca’s pocket!

My puppy truly is the Artful Dodger – though I guess if we ever fall on hard times it could come in useful!

So Dylan ran, and we humans and dogs chased her wobbly Welshie bottom that  was always five paces ahead. Out into the garden, back through the house, up the stairs, you get the picture.

And for any Brits of a certain age reading this, it was like the chase scene from the Benny Hill show – still on you tube if anyone fancies seeing what I mean – and in my head I could hear the der der diddle diddle der der diddle of the theme tune as we all ran round after Dyls.

Finally we cornered her got the keys back, collapsed in a heap and recharged our glasses – trust me we had earned that wine and beer!

Until, Dylan quick as lightening again grabbed one of Sue’s lovely Cath Kidston chunky china mugs that had been put on the floor and she was off into the garden.

Not a problem for Dyls as she can run around with a mop four times her size in her mouth, so a mere mug psst it’s nothing! 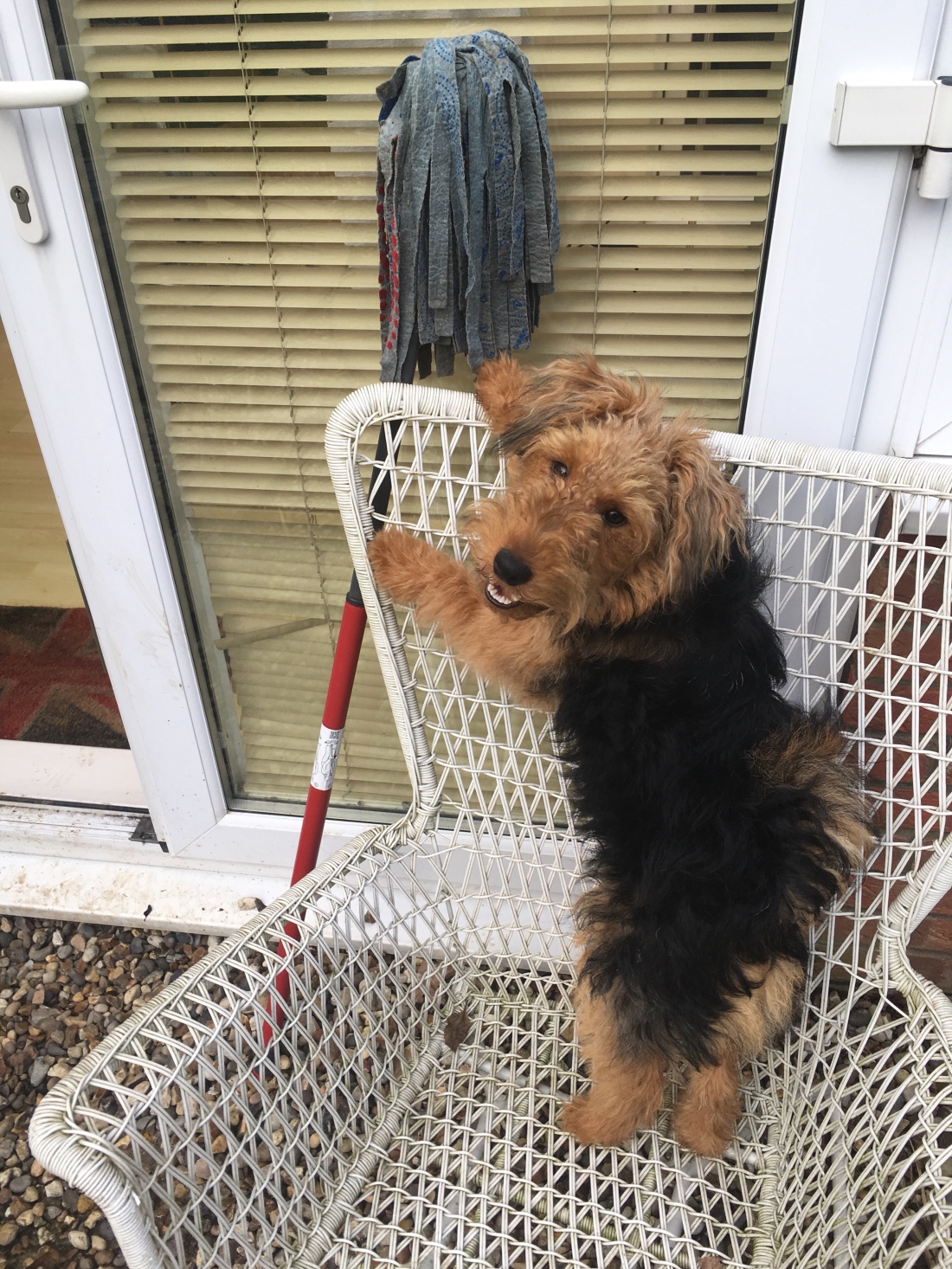 I chased after her, the others laughed, Sue is more relaxed but even so Dyls was running around with expensive china in her mouth. Sue joined me in the garden – though she was laughing all the time,  oh how she has changed – and between us we ambushed Dyls and rescued the mug!

Dylan sulked, smart little Maisie looked impressed (think Sue could have a problem there!) and Reg looked as if to say “Wow, I dodged a bullet with that one, she’s far too much for me to handle!”

So in Dylan’s mind she had a great night and I am simply amazed we ever get asked back anywhere.

But we are on countdown now to our return to puppy class and Dylan seems to have acquired new skill sets and new determination- what can possibly go right!