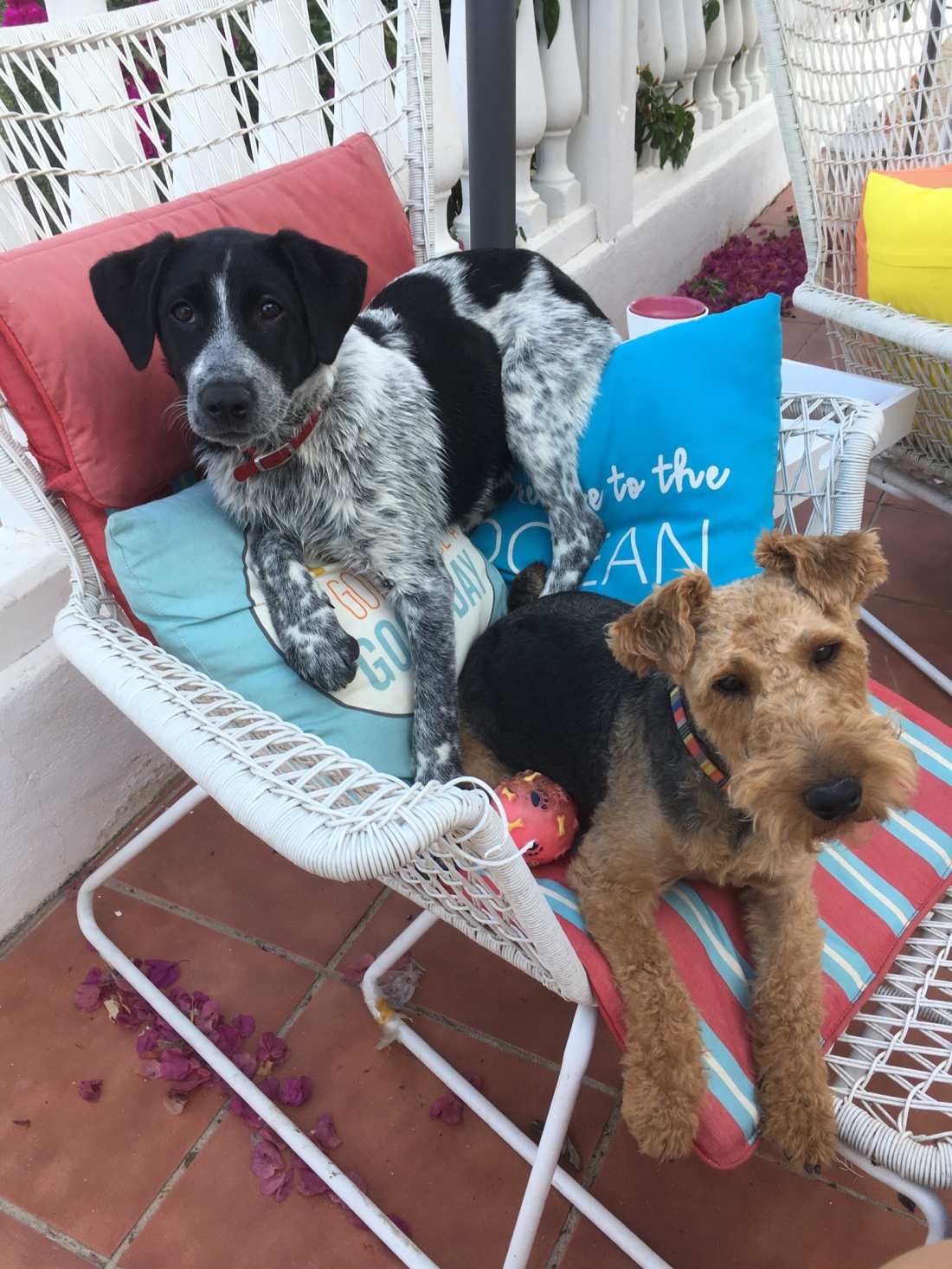 It’s been a while, but life in Spain has been somewhat hectic – more of that to come. But picking up where I left off, this is about the little abandoned puppy.

Dyls and I arrived in Spain and met this little one we have adopted.

This is her story.

Four months ago, dog lovers Kay and Marc – by the way they have six dogs, which apart from one they have rescued – were settling down for the night in their finca in the country.

With no lights except the stars making pinpricks through the black velvet sky all was still and quiet. Then Kay thought she heard a whimper. A quick check confirmed all their crew were ok. Noise travels in the country so she wasn’t sure how far away the sound was coming from.

All went still again. Then a few minutes later came a second whimper. Kay and Marc headed out torches in hand around their land which is a couple of acres.

Nothing to be seen. Then, just as they were about to return home, they heard a pitiful cry. It was coming from a thorny bush at the far edge of their land. They turned their torches onto the bush and in the middle of the prickles lay a tiny black and white puppy. 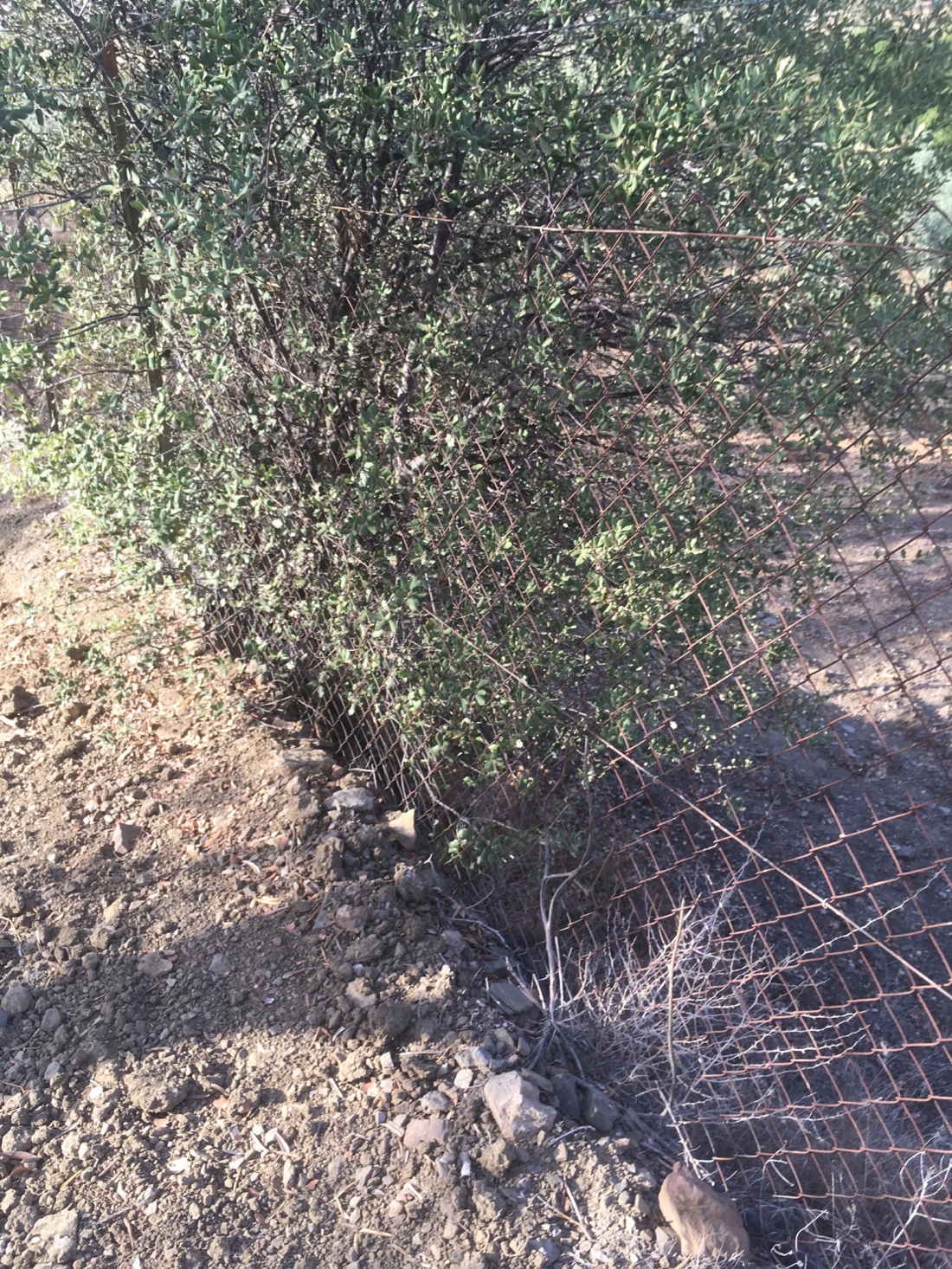 Kay pushed past the thorns which raked her arms as she dug through to release the pup.

They carried the pup home and realised this little one was in a bad way. It’s rectum was hanging outside of it’s tiny body.

First thing in the morning they took the puppy to their vets. The vet identified the puppy as a Breton Pointer – a breed used for hunting in Spain. She thought it had been born like this and cruelly dumped as many hunters don’t want to spend money fixing sick puppies.

An operation could make this puppy well, it was a risk but there was no other option than the one no dog lover wants to consider unless they really have to.

And so the puppy went through surgery to have her bottom out back into place and thankfully with lots of care, love and kindness, the puppy survived and began to thrive.

With six of their own, Kay and Marc made the decision to find a new home for the puppy – even though they had become besotted with her.

And so back in June Dylan and I arrived in Spain and Dylan met her new little sister – who now goes by the name Cyd, after the actress Cyd Charisse. 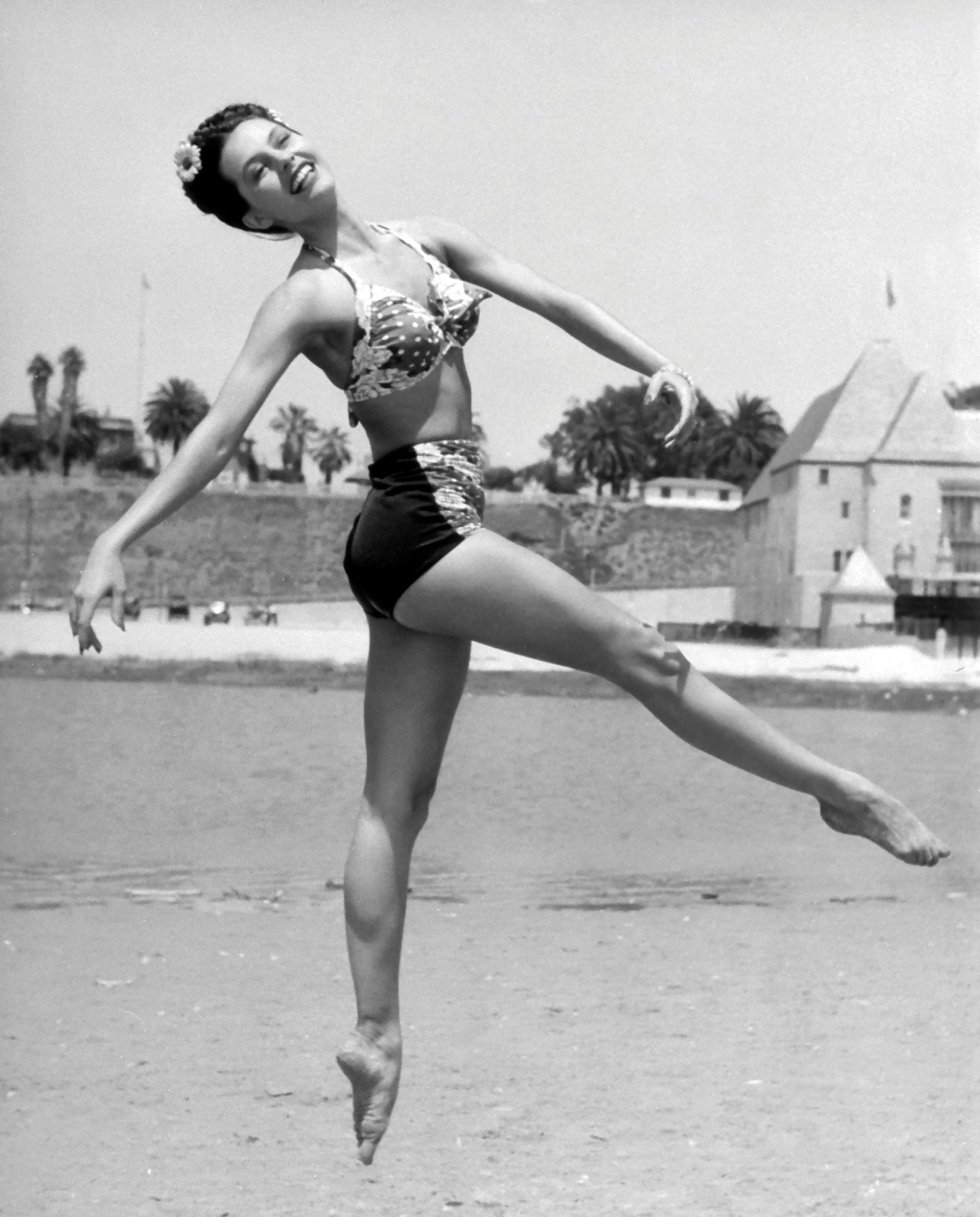 Well, Dylan is a girl with a boys name so made a kind of sense to keep it going.

Dylan and Cyd play all the time. From the minute they met they chased each other, tussled over toys, and rolled each other over – though that’s getting harder for Dylan to do because although originally Dylan was bigger, in a few short weeks Cyd has grown- at least four inches taller than Dyls, and now weighs an impressive 16kg compared to Dylan’s dumpy 9kg. 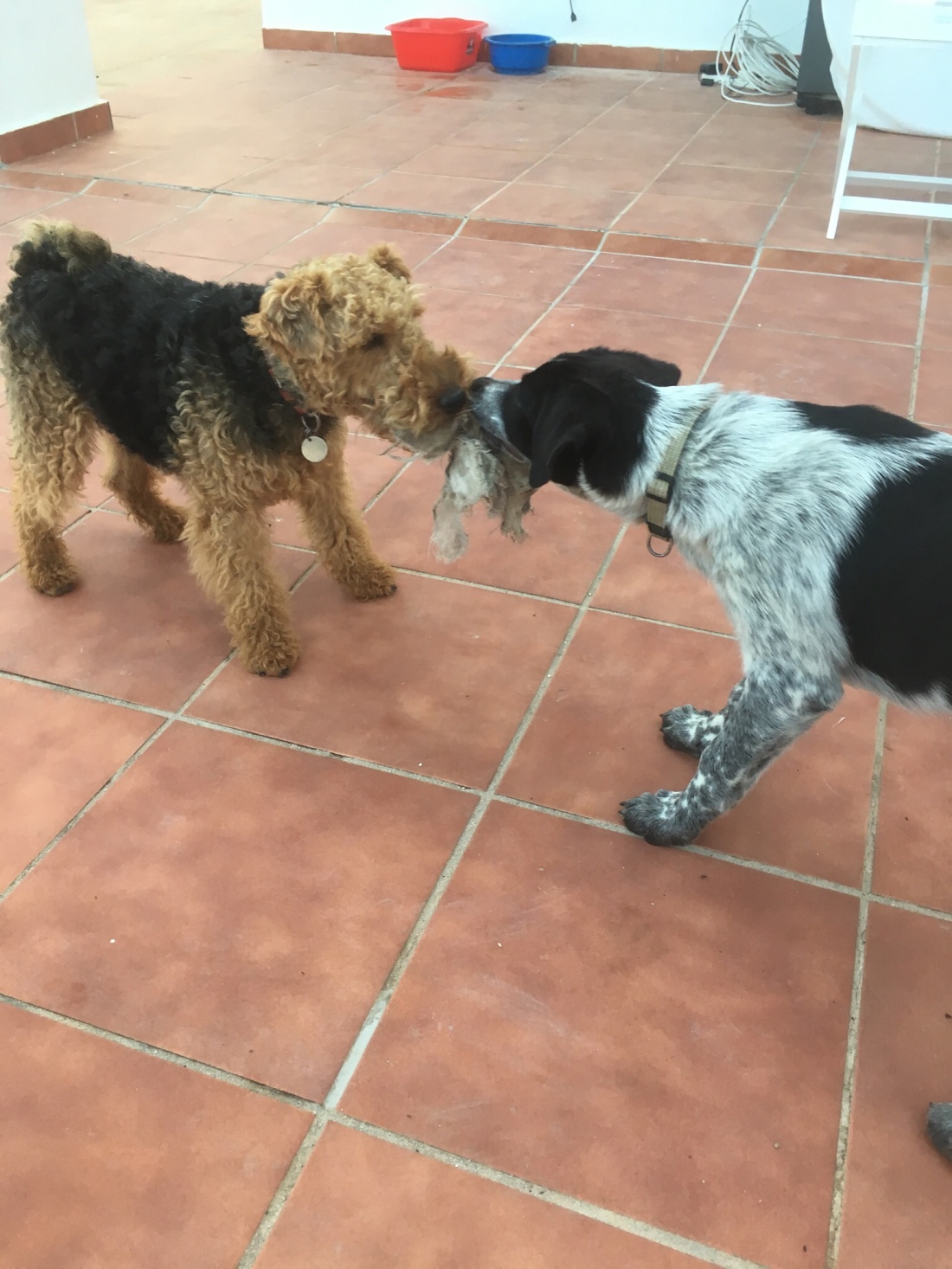 Dyls loves Cyd. Although she was quite disgusted with Cyd as despite Dylan’s best efforts to show Cyd the joy of chasing and running off with a mop, Cyd seems to be a bit wary and runs in the opposite direction!

Dylan barks and tells her off – before making off with the mop.

Cyd has turned into a joyful puppy with a zest for life. She loves everyone and gallops around at hundred miles an hour, all gangly legs and long whiplash tail. Dylan stomps around in true Welshie style – its quite a sight.

She’s even been to puppy class where she did everything she was told – a quicker learner and let me tell you that takes some getting used to – a dog that does as it’s told and comes back when called! Listen and learn Dylan, listen and learn! Yeah right! 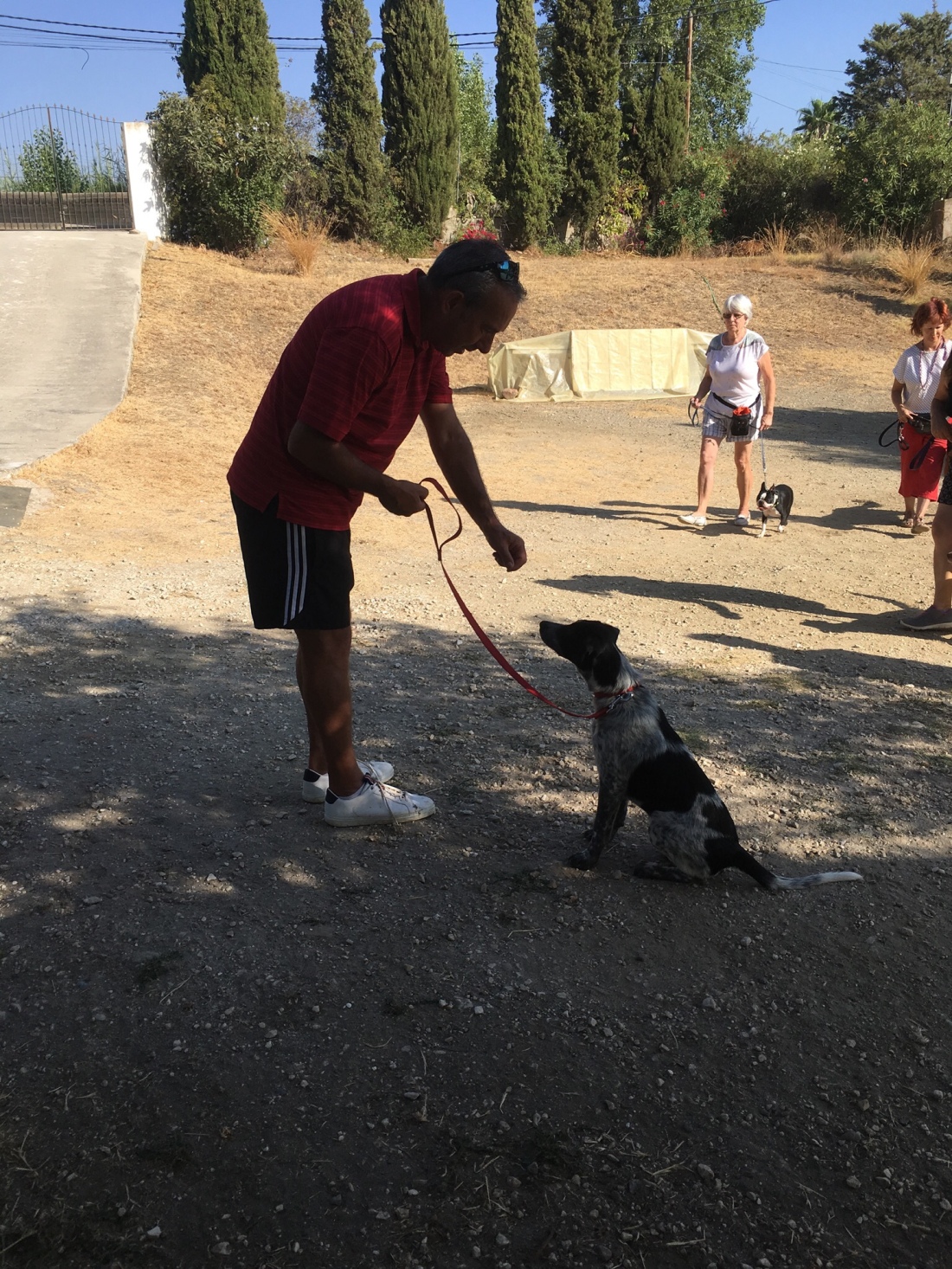 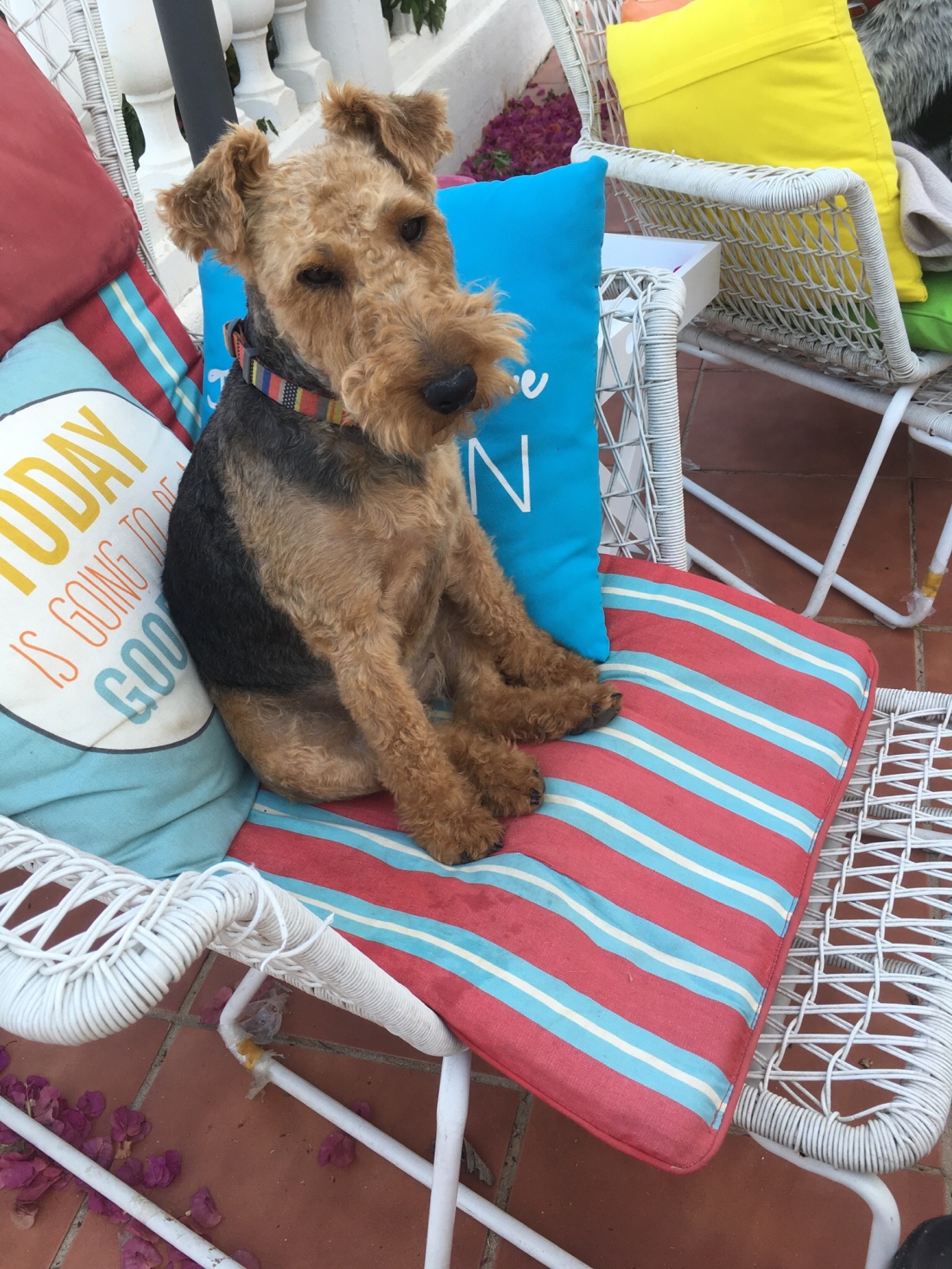 Although Dylan will soon be starting puppy class out here too – a more advanced class that includes agility. Mmm we’ll see how that goes as the one time I tried to encourage her to do an agility course back home, she sat down and refused to budge and I galloped over the jumps and hurled myself through the hoops!

There are many visits to Auntie Kay and Uncle Marc – I have a sneaking suspicion they found it very hard to let Cyd go. But Cyd along with Dylan have play dates and regular walks by the river with their six dogs.

Dylan has even found a boyfriend – Hugo one of their dogs has taken a shine to Dyls and the feeling is mutual – though she does tell him off if he tries to get frisky! Having none of that malarkey! 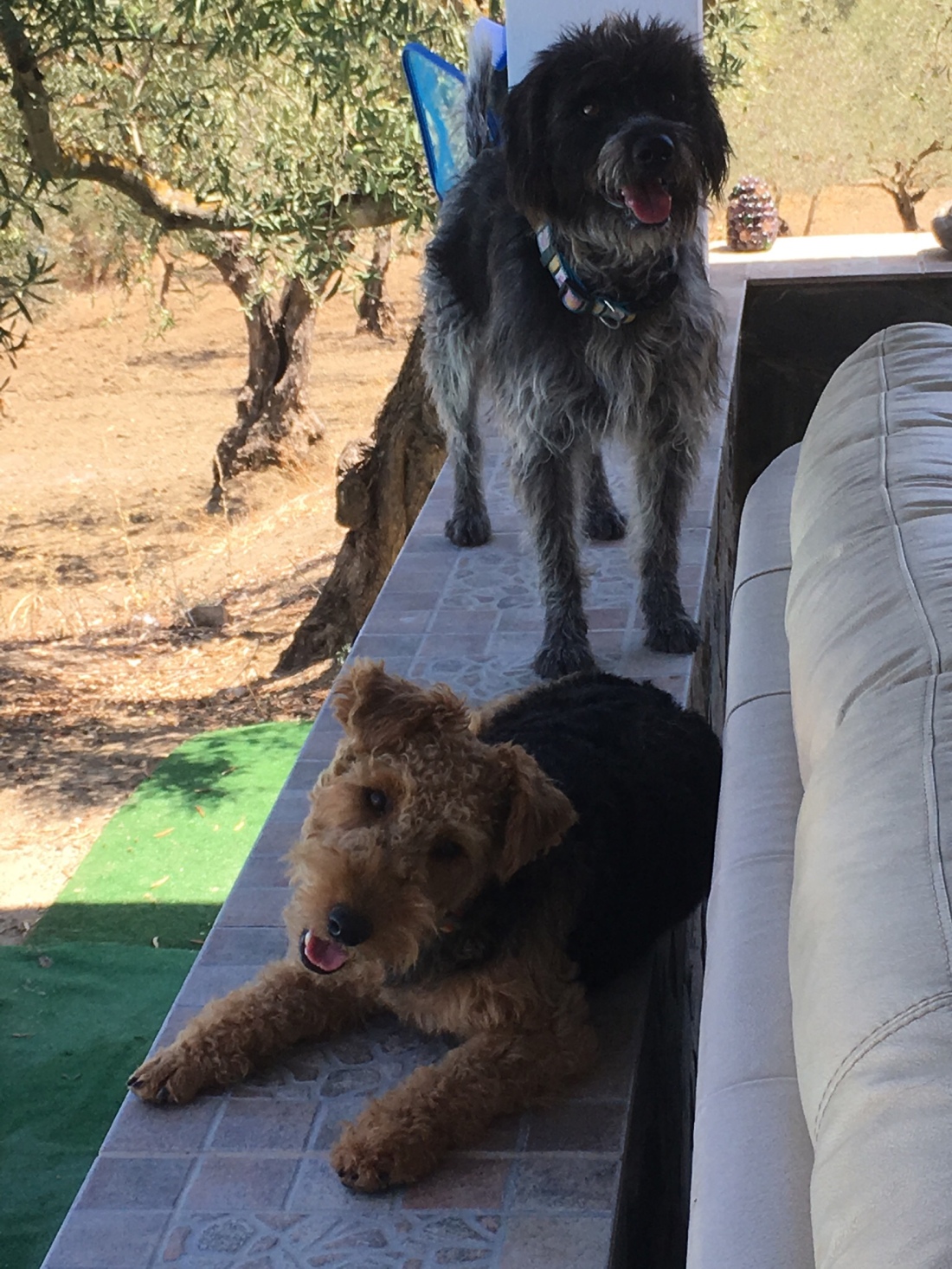 Meanwhile Cyd is like the little sister tagging along on a date!

So all is well. The dogs play early in the morning and then sleep during the heat of the day but come 6pm they are off and running – it’s a joy to watch. And we’re all thankful this little ones story had a happy ending. 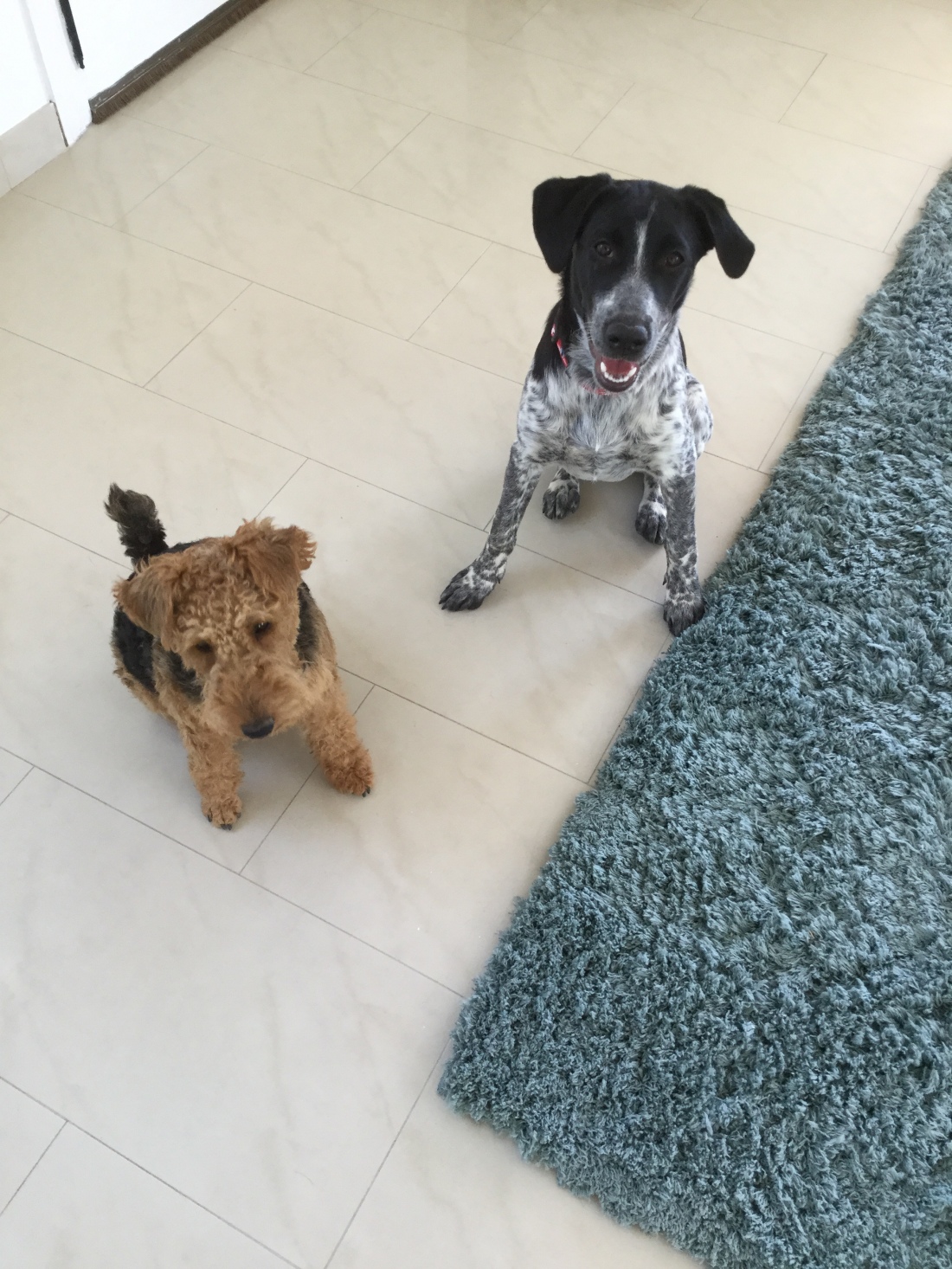 And happy endings like this of course call for a glass or two of Rioja – in celebration – well would be rude not to!

3 thoughts on “When Dylan met Cyd!”