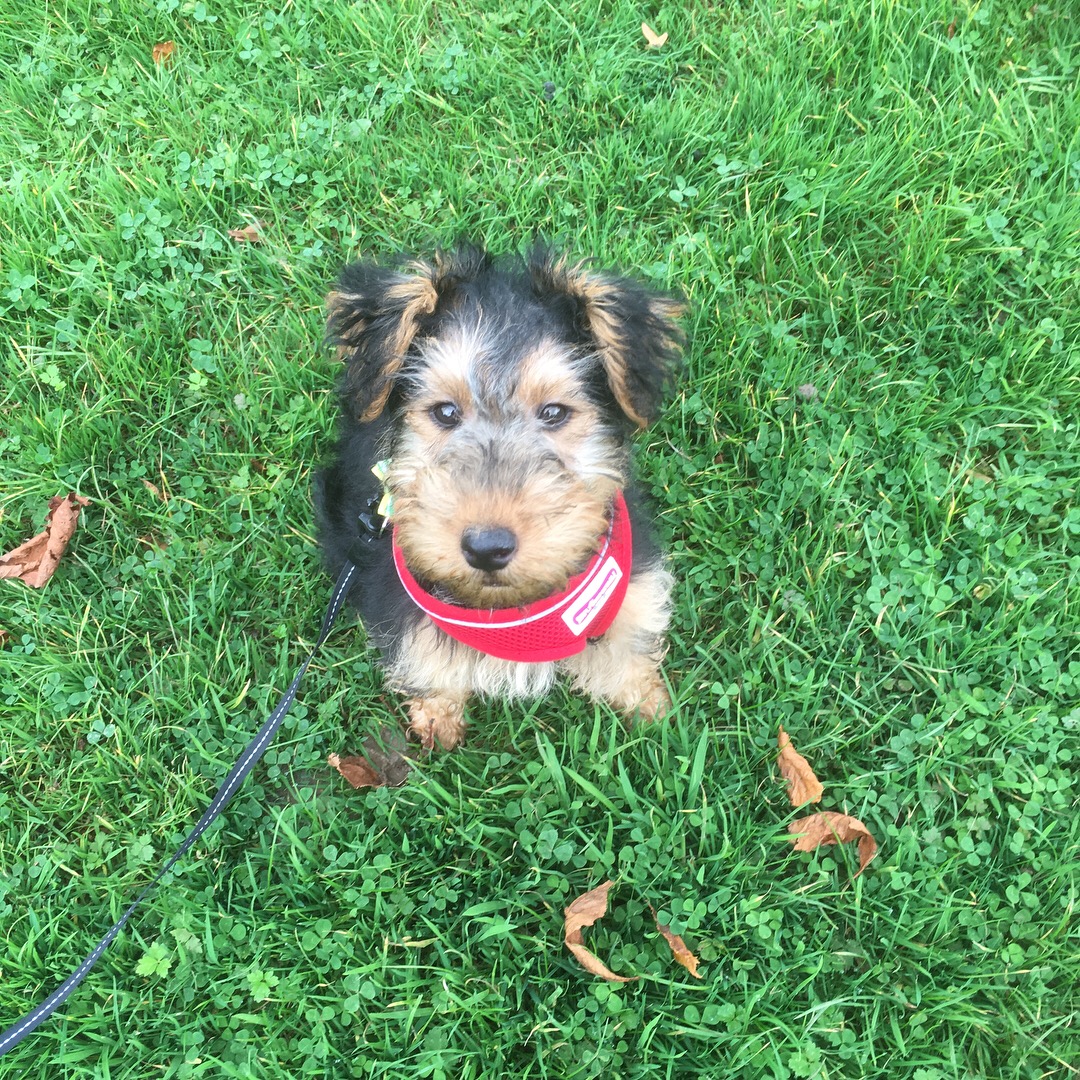 I am soaked –  not just rained on – but thoroughly soaked. My kitchen floor is covered in mud, a leg of a dining room chair is ruined, once pristine carpets have frayed edges. My whirlpool bath will never whirl again.

The culprit of all this carnage, (and more) a seven month Welsh Terrier called Dylan, is hanging off my sleeve growling as she tugs at it, then she lets go and twists in the air as she leaps higher trying to grab the prize that is my sleeve.

I stupidly thought the walk in the woods,  even in the rain, would wear her out. Errr! No! In fact she’s bouncing around like Tigger!

I look at her, she’s so excited with this new game – glad she is because my dwindling number of sweaters aren’t – and I laugh and think back a couple of years when this puppy was wishful thinking. When my life could not be more different to how it is now. How I stepped off a cliff and although I haven’t yet landed safely, I am floating, not plummeting to the ground.

Three years ago I had a what a lot of people would call an amazing career and thanks to that, lifestyle. As editorial director of 5 women’s glossy magazines, it was an Ab Fab kind of world. Though I’d like to think we were a bit sharper than Patsy and Edina!

The cliches are true, it was cocktail parties, meetings discussing this seasons boot shapes, who had the perfect red lipstick, was Prince Harry ever going to marry, plus there were the perks of travelling to incredible places and staying in five star luxury.

The pressure each week was bringing out magazines that would make more and more money in a world where women were finding other media to entertain and  and inform them.

Like so many businesses, not just media, budgets and staff levels were cut -but its a business and we still had to hit our targets. And we did, but that meant stupid hours.

We kept going, I kept going, as so many of us do spinning plates, hoping nothing would slip -and then as is so often the way, it came crashing down when my lovely mum had a fall that put her in hospital, and from which she never recovered.

Those six months everything changed. I was her carer, her advocate, lastly her daughter – it was down to me. My dad had died when I was 20, my brothers moved hundreds of miles away, so it had always been mum and I. She pushed me to leave home not long after dad died, she never wanted me to feel I had a duty to look after her. Instead by leaving, we became closer. And no it wasn’t a duty to care for her when she became ill – I wanted to. Naively I thought she’d continue to be the strong feisty woman she’d always been.

I slept fully dressed as I never knew when I would get a call to drive over to her in the middle of the night as she’d got out of bed and couldn’t get back in. That could happen three times a night. Then I’d get home shower, dress and go to work  before taking over from the carers she had during the day.

And you know what, the magazines came out as normal. The targets got met, most importantly my mum was looked after, and I tried to keep going, though at times I felt broken.

My mum died six months later. I went back to my life, but inside I was a shell. Did I want this anymore? The constant arguing with management about putting up prices of magazines to ridiculous levels, while at the same time slashing the budgets so the quality suffered, giving the readers an inferior product but asking them to pay more and more for it.

I had wanted to be a journalist since I was 11. This was a world I had been in for 30 years, and it had a been a fabulous world and I had been so so lucky to travel to amazing places, meet interesting people and work with talented people and for that  I will always be thankful.

But did I want to work 12-15 hour days, take the pressure home with me, and let it affect my friendships and relationships – because it did.

Everyone said, “oh its natural you are grieving”  – and I was. “You’re not thinking straight” – and I can say hand on heart that its only now two and half years after losing my mum, that I feel “me” again. But there was something else, almost as if I could see a different way of life flickering in the corner of my eye if only I had the guts to grab it.

So seven months ago I stepped off the cliff. Took redundancy, got the puppy I had always dreamed of. I decided to go with the flow. See what happens, to not be in control – and I’m not, in fact most of the time Dylan is!

So this is about me and Dyls. Our adventures – and anyone who has ever had a puppy knows there are many – and if you’ve ever had a Welsh Terrier – affectionate, loving, stubborn, wilful and downright naughty – then you probably know exactly how those adventures can go!

And its about jumping off a cliff, facing your fears and seeing how and where you land.

Oh and as I finish writing this, my little Welshie monster lies sleeping beside me and is gently snoring
Guess this sweater will live to see another day!

12 thoughts on “Funny how life changes”